The mission of Right to Life of Wyoming is to educate the people of Wyoming concerning the reality and tragic consequences of abortion, infanticide, embryonic stem cell research, and euthanasia, including physician-assisted suicide.

Our vision is to promote a culture of life from conception to natural death. We provide information for students, community and social groups, and church congregations. Our efforts are aimed at changing the law which permits abortion on demand and achieving a constitutional amendment to forbid abortion except to prevent death of the mother. This organization does not support, plan or participate in activities which are destructive or deliberately confrontational in nature.

The only no-compromise gun lobby in Washington.

Jeremiah Hardesty proudly proclaims his support for Constitutional Rights and the Second Amendment on his website and as part of his platform.

Here is what Hardesty said when describing what the Second Amendment means: “It means we have the right to own modern weapons for self-defense or as a last resort against a tyrannical government. It means my right to self-defense was granted by God and no one may take this right away. As a Legislator, it would be my duty to conserve these laws and pass any and all legislation necessary to defend our rights defined in our founding documents.”

GOA institutes a rigorous evaluation process involving a careful review of a candidate’s history and beliefs, and Jeremiah scored 100% on his 2022 GOA candidate survey.

Additionally, Hardesty wants to strengthen SF0102 (the Wyoming Second Amendment Protection Act) if he is elected. This GOA-backed legislation passed in March 2022 and makes it illegal for state or local officials to institute or cooperate with unconstitutional federal gun control. This law has the nation’s strongest criminal penalty of one year in jail for any official who violates the Constitutional rights of Wyoming citizens. 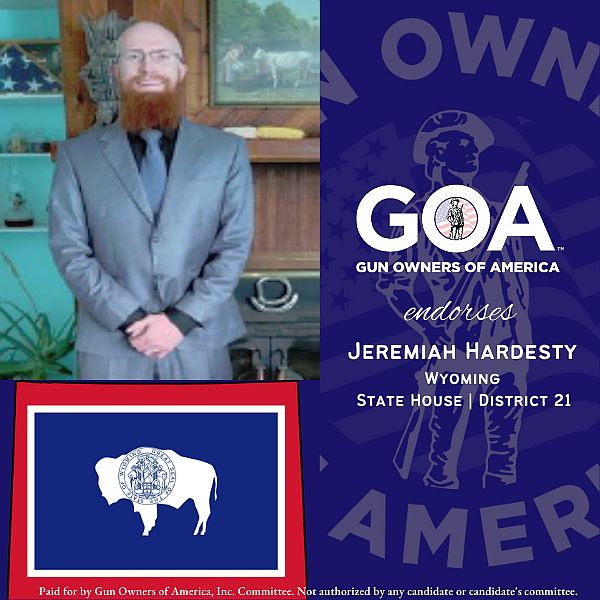 Additionally, Hardesty has stated that he wants to "...make stronger laws against gun-free zones, add legislation that would entice manufacturers to move to Wyoming...protect not just owners but distributors, retailers, and manufacturers."

Jeremiah Hardesty will be the "no compromise" Second Amendment champion for House District 21.

Wyoming needs strong and consistent conservative voices in the State Legislature like Hardesty, so please be sure to vote for Jeremiah Hardesty in the Republican Primary on August 16.

A vote for Jeremiah Hardesty is a vote for Freedom and Liberty!

P.S. Please distribute this endorsement to your pro-Second Amendment family and friends and urge them to Vote for Jeremiah Hardesty!

Endorsement from the Students For Life Action group:

See their web site at: https://www.studentsforlifeaction.org/